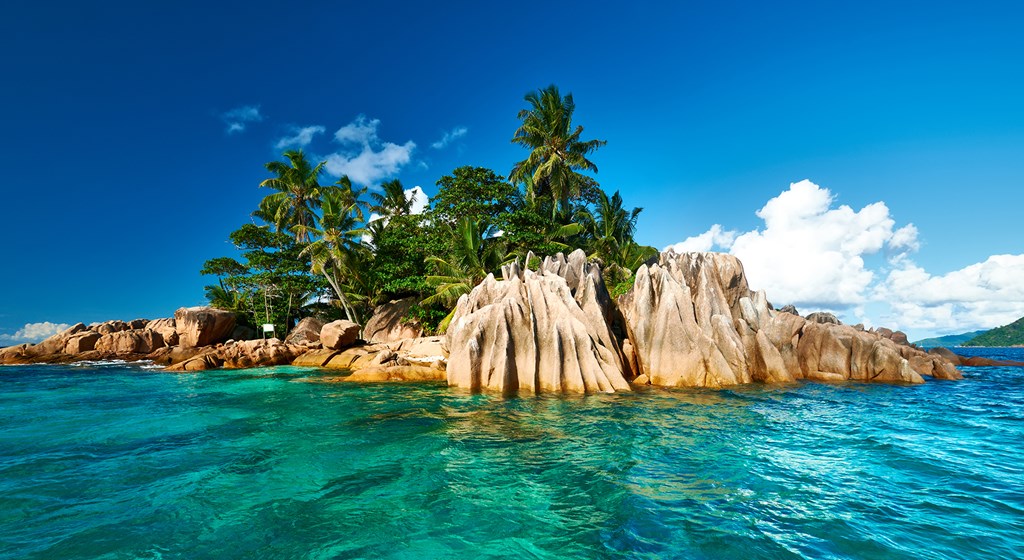 Round Table: Pick Your Seven

by theimmortalgoon on November 29, 2016 in Art & Music, DP, Juke of Spades, Process, Qmusing, The Willing Destruction of Self Belief, Veritas Obscura • 0 Comments

V-Day: You’re being banished to an island with no means of communication. You’re allowed to bring 7 movies, songs and books each. What will be your choices?

We’re assuming that there’s a Lost style bunker where you have everything you need for basic survival and can watch movies.

DP: I was just falling asleep in my office. Finally something interesting to do! I’ll have to mull this over…

ML: Should the focus be on entertainment only? Or are we to use these as instructional aides during our island exile?

TIG: Motherfucker, there is no survival!  Don’t you get it?  We’re dead.

Psycho Because it is my favorite movie!
A Christmas Story I would play it for 24 hours straight, once a year.
Alien Sigourney Weaver is a badass.
Jurassic Park
A Nightmare on Elm Street 3
Interview with the Vampire
The Birdcage

I can’t think of a better method than bringing my favorites. I’d probably learn to hate them though.

My first consideration is that I want something that I’ve read before, so I know that I’ll enjoy it. Secondly, I want books that are long and meaty so that they’ll keep me occupied as long as possible. I tried for a variety of styles and genres.

The Complete Works of William Shakespeare I’ve only read a bit of Shakespeare (enough to know I’d enjoy studying it at length). I think I could spend a lot of time with this one.

100 Poems from the Japanese translated by Kenneth Rexroth A short book, but it was one of my father’s favorites and holds sentimental value. I can read it over and over and over.

It by Stephen King I love his older work. I probably should take The Stand because I love it and it’s longer, but I just reread it so right now It has more appeal.

Watership Down by Richard Adams because it has been a favorite of mine since I was ten.

Beowulf translated by Seamus Heaney. “Beowulf got ready, donned his war gear, indifferent to death; his mighty, hand-forged, fine-webbed mail would soon meet with the menace underwater. It would keep the bone-cage of his body safe”. I could study the Old English original, too.

Art Through the Ages It’s my favorite subject. I could use it as visual reference with which to draw in the sand and on the paper I would make. I’ve always understood history best through art, so this would be the best way for me to remember history. Also, pretty pictures.

CV: I almost put an Art History book but i didnt know any good ones. Completed works is a good idea. Im already changing my list. How long would we have to decide before we were banished?

V-Day: You just know that you’re going to be banished, you don’t know when. So you could revise as often as you wish until you’re actually banished (which could be any time).

But if you don’t have a list, you’ll be banished with nothing!

CV: If anyone tried to banish me Ide kick em in the dick

TIG: Friends! There are plenty of logical reasons why this scenario might take place.

V-Day: If you’re so on top of this, what do you choose?

All books that won’t make as much sense the first time you read them as they will upon subsequent re-readings:

As I’m falling into dementia, I don’t want Wilson there. I want to be deluded into thinking that I’m with young beauties that does terrible things to themselves for my benefit because they love me and want me to be happy; I want to train my diseased mind that that we are on the island together. When I inevitably go mad, I want to have the kind of broken psyche that worries about leaving my haram on the island alone.

V-Day: Walden’s Pond and the I Ching are fantastic choices. I like how your list starts out so classy and then ends with you as a psycho lech. Well-rounded. 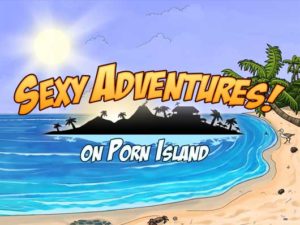 I feel like if we get entire books we should get entire albums. So there you go.

TIG: There is nothing on this planet I wouldn’t get tired of listening to, album or not.  Except for Mozart, I guess.  I’m sticking with my choice.

Books:
1. Spanish Textbook (w/ spanish to english dictionary in the back, like most have)
2. World Atlas
3. Lord of the Flies (I’m on an island for christ’s sake)
4. Nightmares and Dreamscapes (I like short stories)
5. Charles Addams anthology. I love books with pictures, ga-hick!
6. War and Peace (Saving it for the island ala George Costanza)
7. Sketchbook (excellent call CV. I’ll use charcoal to draw if there’s no pens or pencils)

Movies:
1. The Fugitive (all time fav)
2. Alice in Wonderland (first movie I ever saw)
3. Friday the 13th pt. 4
(What’s good enough for Axel is good enough for me…”Hi girls, thanks for waiting up for me. Oh no”)
4. Ken Burns Baseball (excellent Ken Burns call CV)
5. Silence of the Lambs (It puts the urine on its skin, or else it gets the jellyfish again)
6. The Simpsons Season 4
7. 2001: A Space Odyssey 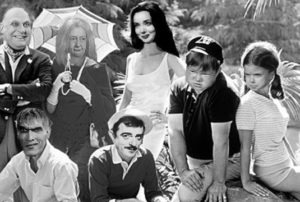 V-Day: Smash- the riddle book is a great call!! I feel like a lot of this comes down to what kind of crazy do you want to end up with. You’ll running around muttering riddles,

TIG will be talking nonsense to his imaginary harem. Or, someone will end up on your island and you’ll be that protector character that always says “You may pass into these ruins once you answer me these riddles three!”

Books:
The Bible
The Three of Swords
Where The Red Fern Grows
The Great Gatsby
Mossflower
The Heritage of Shannara
Iliad

Movies:
Schindler’s List
Heat
Purple Rain
The Good, The Bad, The Ugly
The Lord of the Rings Trilogy Extended
Dances with Wolves
Traffic

Hard to narrow down but I’d start with this. 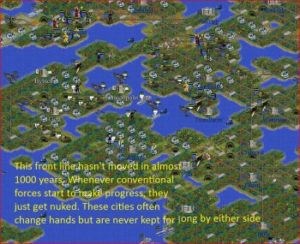 TIG: You can spend a lot of time on CIV II.

NIN is killing it on these lists

Then I drop the mic and go play these games

I think you guys just gave me a pretty decent reading list! 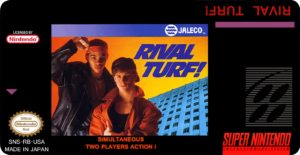 ML: I love how World of Warcraft makes the list. The game could keep me actively playing for probably the next 20 years easily without needing anything else.

TIG: “I’ll ask for help after this next turn…”

ML, Smash and I said the same thing at work! I’ve never played WOW really, but I put it on my list because I know I could spend some serious time with it.

I love seeing the overlap on lists AKA the definitive list of worthwhile endeavors. Here’s all the stuff I’ve seen overlap:

Music:
Like CV said, “NIN is killing it”
Also a lot of: Beatles, Zepp, Bowie, Mozart

Process: The lists are awesome. I keep seeing everybody’s list and thinking damn what great choices.

CV, Megaman X Collection was on the verge for me. Damn those are great games.

Is it too late to switch to Civ III?

Art supplies/blank sketch is brilliant. Even if it cost a few slots it’d be worth it. 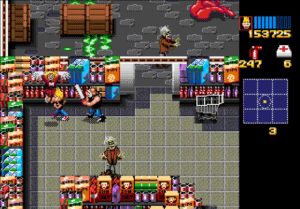 Smash Lee: Zombies ate my neighbors! Juke, I had completely forgot how much I loved this game. The Chopping Mall level was my favorite. Didn’t it also have a Primus song in it? Too many puppies maybe? (Sim city 2000 is also amazing)

I instantly regretted not adding Roller Coaster Tycoon. So many good hours playing those games.

Process: Can’t go wrong with any Civ game, 2-4. Shawshank Redemption and Eternal Sunshine… , excellent choices. Also, how could I forget Last of Us. Amazingly emotional game. I remember scoffing at the 10/10 scores it was getting until I finished it. Sets a benchmark for gaming. Simulation games are the shit. Sim City 2000 and I never played it but I heard great things about Railroad Tycoon. Surprised Goldeneye hasn’t made the list somewhere.

Juke: Castaway and Treasure Island almost made my list. Great picks. Maybe I’d put Civ on my list in place of Ms. Pacman, that way I’ve got something with a little more substance tha p-p-p-p-p- PAC POWER!

I guess it’s time I add to this list.

So the idea here is that we’ve been banished and given no means of communication to the outside world. I plan to build my own radio and eventually leave the island. None of this eating around writing SOS in the sand garbage. I chose a Neo Geo not just because Metal Slug is awesome. But also because it’s a complicated system and will likely have more components to salvage. Although Seaman for Sega Dreamcast was voiced by Leonard Nimoy, that isn’t why I chose it. The game includes a microphone which will be needed in constructing my radio.

If there is a choice in islands to be banished on. I’d prefer one around 35° latitude either north or south.

TIG: GetOregonized: survivor that talks about his time on the island

GetOregonized: Smash- Ideally I’d have a mix of Under The Pink and Little Earthquakes but I had to choose one.

Process/Everyone- How about instead, pornographic tattoos?

I can’t think of a top seven in each category because I either have too many favorites, or not enough choices but here’s my rundown:

My lists were very singularly themed for the most part it seems.