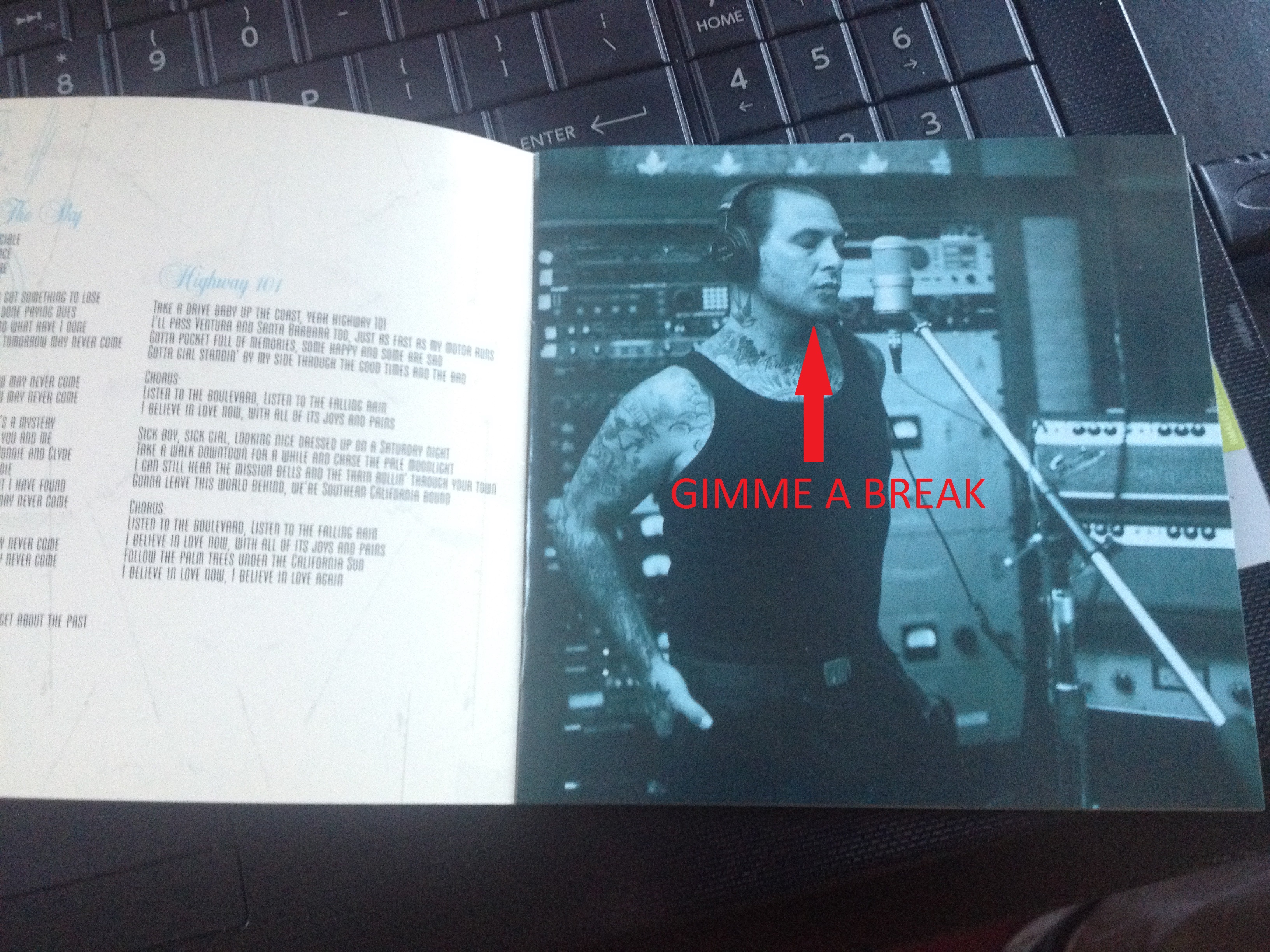 I’m not sure why I ever owned this album.  Social Distortion has never been one of my favorite bands, and this album was released in 2004- long after the bulk of my CD buying was done.  If you were to take a poll of my friends and ask them what bands have influenced me over the years, none of them would ever fathom to guess Social Distortion.  On top of this, I have no recollection of HOW I originally purchased this album.  Nevertheless, I distinctly remember this CD in my collection, and last night at the local record store, Nerdboy Records, it was just about the only album on the shelves that I recognized.  And since that store closes at 7pm (I love the place, I get all my VHS tapes there, but 7pm!?  Really!?  That’s too early!) and I was being ushered out the door, I had to make a snap decision.  So, here we are.

Let me start off by saying- This album is definitely not making any of my top ten lists.  However, there are a few songs that are sorta decent.

The first track on the album is Reach For The Sky.  It’s upbeat and catchy.  It definitely has an early 2000’s “anthem” feel to it.  It’s one of Social Distortion’s more recognizable songs.  It’s only alright, though…there’s something about this song that seems a little hollow and generic.  It comes off like a wannabe The Offspring song.  But it’s decent.

The fourth song on the album, Foot Prints On My Ceiling is pretty good.  The title of the song reminds me of when that baby crawls on the ceiling in Trainspotting.  That whole dead baby thing is so disturbing in that movie.  That’s a great fucking movie, by the way.  Go watch it if you haven’t seen it in a while.  …I digress.  This song has a unique sound to it, which is lacking on a lot of the songs on this album.  It’s got a nice guitar solo in the middle, and the singer is sounding a little like Kurt Cobain, so, you know, that’s not a bad thing.

Angel’s Wings is the last track on the album.  It’s fairly solid.  The lyrics are nothing to write home about, but it’s catchy enough.  It got my foot tapping.  I read that a lot of the songs on this album are a eulogy to the band’s original guitarist, who died in the year 2000.  So that adds some depth, I guess.

Overall, this album is pretty generic.  The whole thing reminds me of so much of SoCal culture – trying so hard to fit in and be cool, it forgets to actually make some good music.  Don’t get me wrong, SoCal has produced some of the very best music in American history, and in a wide variety of genres- The Beach Boys, The Doors, Sublime, No Doubt, N.W.A., just to name a few.  But after living in SoCal for SEVEN years(!), sometimes the bullshit plastic fake culture gets to be a little much, and you see it everywhere and in all art.  And it sucks.  Because honestly, I think this band is really talented, and that DOES come through in a few places on this album, but overall it’s just kind of a forgettable, early 2000’s, pop-punk waste.

Take Nickels and Dimes, the fifth song on the album.  It’s just so fucking forced and phony.  It sounds like it’s trying to be another “anthem” for our generation, but it just comes across as a rich musician trying to connect with every possible demographic so he can sell records.

And then there’s the 8th track, Faithless.  It’s just…forgettable.  To be fair, I got into a discussion about SeaWorld while I was listening to this for the review.  I went to SeaWorld last weekend, and…you know…#Blackfish.

I’ve said my peace.  Sex, Love and Rock ‘n’ Roll isn’t AWFUL, but it just doesn’t take any chances at all.  It’s weak.

← Occidentalism: Hope in a Murky Soup of Inner Darkness
Democratic Debate 8 or 9: Feed My Frankenstein →