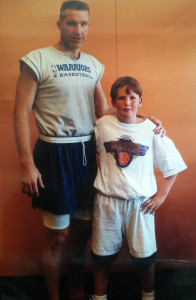 I used to have a Snickers after a game when I was a kid. If a today’s parent saw that they’d freak: “GOD FORBID a peanut should touch my special little Jaden’s PARTICIPATION TROPHY!” If one does I’ll sue!”

Let’s go back in time shall we?

I was playing little league baseball and was on a pretty good team. I however, was stuck in right field. Even at 10, you know where you stand when you’re in right field on a little league team. You suck. But, I was in uniform, I took at bats, I knew my place on the team. When we took third place that year we all got trophies. The trophy was small. It had a faux wood base and a gold plastic batter on top. There was a brass plate that had the inscription: “1991 Minor League Champs.” I remember hearing the jubilation of my teammates as we received these and I held mine and thought: third place is NOT a champ.

I played a ton of basketball and went to camps every summer. At the end of camp the coaches gave all their individual players awards. We all got a piece of paper looking certificate thing. It read: “Thanks for attending the Chris Mullin basketball camp. We give you the special recognition of…” Then a blank line with your talent written in. Mine said: “…Big Heart.” That’s not a talent. If that’s literally true, I should see a doctor.

Taekwondo was a sport that I liked a lot. I was in some tournaments where I was the only one in my division. There were three judges grading my form. Against who? Why even compete? I could’ve let out a beefy fart, bowed, and still taken home the top accolade. I wanted there to be a ranking system. Something in place so that even a one person division still had to give effort. If there’s no one else but you in a division, let’s still have a little competition. The point system I created would’ve come into effect. A score of 9 and up is first place, 8 and up is second and so forth. That way, a beefy fart wouldn’t take the cake. Tae-kwon-duce.

What’s the point of an award if everyone gets one? It helps keep the local trophy shop in business. But it’s the kids’ competitive drive that’s going out of business with each participation trophy they’re all taking home.

I returned home a few weeks ago. I went to my old room looking for my trophies. My mom said she had gotten rid of them. Good. They were cheap pieces of crap that reinforced: you can play like a cheap piece of crap AND you can hold the same thing in your hand. Now let’s have a juice box and hold hands in a world of mediocrity.

← The Sam Harris v. Noam Chomsky v. George Monbiot THREE-WAY Cage Match (and the post-match analysis by The Falls Society that the American people have been BEGGING for)
Gulls at the Beach →