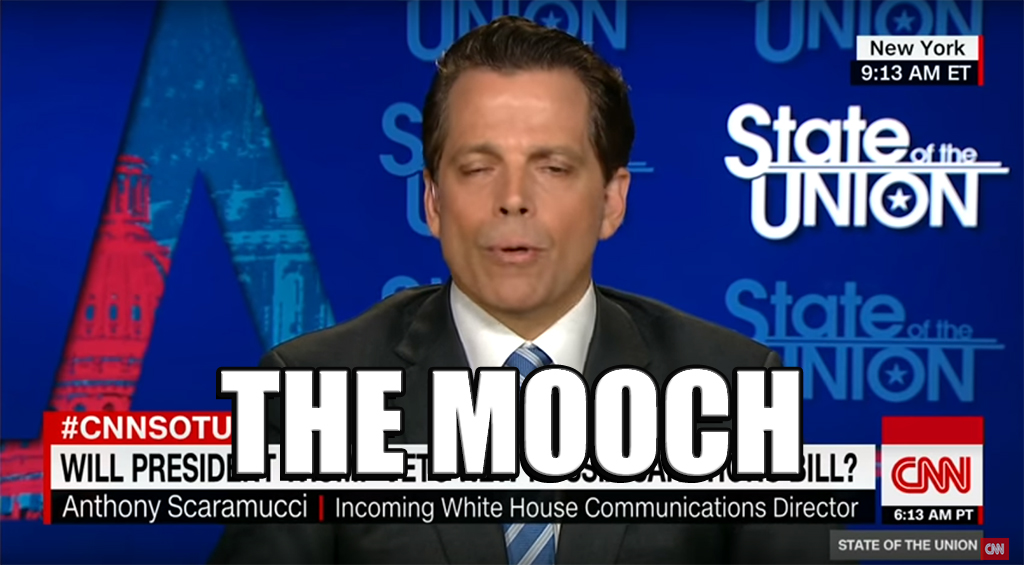 by theimmortalgoon on July 28, 2017 in Disquisitions, The Willing Destruction of Self Belief • 1 Comment

The Mooch arrived too late to steal this many headlines, even in Season 1.

Trump’s newest reality television show is the only televised entertainment that almost makes the Washington Post’s new tagline kind of true. The current anti-hero in the White House is too draconian to be realistic, comes from a world that already has a sprawling 200-year catalogue of characters, documents to sort through, weird legal briefs, and other impenetrable walls that make it difficult enough to follow as it is. House of Cards used some of the legal briefs to great effect, something that the current season of Trump’s new reality show has yet to do.

However, Trump’s current reality show puts a lot of this aside and isn’t fundamentally all that different from other TV shows. It has succeeded in keeping very high ratings, even from people that hate the characters.  We watch Trump’s reality show for some of the same reasons that we watch any reality show about whiney rich white people: We like it when someone on Bridzillas has a melt-down; We clench our fists and affirm how much we hate Heidi and Spencer. We go to the water-cooler and discuss how stupid Jessica Simpson is. We debate how realistic any of these things are. When The Real World came to Portland, I personally knew a few people in bars that were quick to point out that the producers seemed to know the moment a fight was scheduled to break out.

As Trump’s reality show gets about a fourth-of-the-way through its current season, our ties to its characters have been well established.  Some of the characters, like Mitch McConnell have been around for far longer than this season.  By this point we know who the characters are and we should be getting some pay off for some of the set-ups that have been established thus far.  We might be worried about North Korea, the outcome of the War Against Terror (a plot line that everyone is surely tired of by this point), and how the antagonists are going to rip apart anything that remains of a social contract or safety net. These kinds of callbacks and the character growth is Trump’s reality show’s greatest asset. McCain confronting (and trying to atone for) summoning Palin into the national mainstream. Tulsi Gabbard’s inconsistent politicking for further influence far away on the Hawaiian islands (her conversion to Bernieism was a consistent, of strange, character arc). Chuck Schumer attempting to navigate the Democratic Party through difficult waters, which has a lot more charm now that the Party has been placed in an underdog status since last season. Lindsey Graham reunited with his (maybe?) lover as McCain came back onto the senate floor. Perhaps no other story line has the same appeal as the one with Lisa Murkowski and Susan Collins. Both have them are characters that have been in play for about a decade and it’s been amazing to watch the entire focus of everything come to sit upon their shoulders.  Stuck with having to reconcile the new season’s characters, their own state interests, the subtle gender narrative that has been weaving through the series since at least the Abigail Adams story line of the 1797-1801 season—all of this has been compelling viewing because we knew the characters and the stakes.

We’ve seen the current characters claim to come from humble beginnings and some we know that weren’t so humble: Rand Paul’s claims to hate government intervention despite being a child grown up on the government tit. This resonates to us because we know his father, Ron Paul, was the same kind of charlatan. Steve Scalise had a great storyline because we know his party’s position on being armed; even Al Frankin’s abrupt turn from comedian to cast member makes sense because we know so much about his character after the time we’ve spent with him.  All of the main characters that we know have suffered triumphs, and we’ve seen their decisions and motivations move consistently for years. We know where they all stand in an impossibly expansive cast of characters that all ring true.

All, except, for the Mooch, who came crawling out of a casting room into the middle of all of this season’s already crowded storylines. 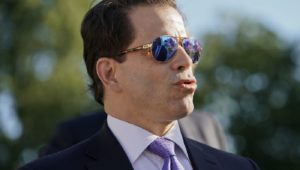 The Mooch came suddenly into the series in the middle of the first season.  Within moments of his explosive entrance, all other characters took a back seat. He immediately announced that he was now in charge of the Office of Public Liaison. There, he immediately broke the fourth wall in ways full of embarassing bad-itude:

My best service to him is acting as a fair broker for the situation, because what happens in Washington is they will stab you right in the chest with a smile on their face. It’s like the Game of Thrones and the Hunger Games screenwriters got together with the writers of House of Cards and they made a story. And the other thing I have learned about these people in Washington, Nelson, is they have no money. So what happens when they have no fucking money is they fight about what seat they are in and what the title is. Fucking congressmen act like that. They are fucking jackasses…

“How old are you?” he asked. “You look good. No lines on your face. What are you, a Sagittarius?”

Scaramucci nodded approvingly. “Fucking king of the jungle!” he said, lifting his drink.

George Sifakis, the Director of the Office of Public Liaison, wasn’t particularly loved by Trump audiences. 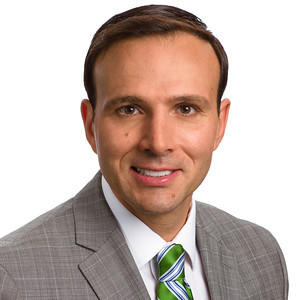 But at least there was some reason that he was there—we know that he had a connection to previous seasons and it helped to add some tension between the competing factions in this season’s reality show. For instance changing the office name from Obama’s White House Office of Public Engagement and Intergovernmental Affairs. This did a good job of underlining how this season would be different from last season in subtle ways: Sifakis and his bosses weren’t interested in public engagement, this wasn’t a partnership, it was a hostile government throwing a bone to a hostile public.

But this isn’t the kind of subtle characterization we can expect this season, at least with The Mooch. The Mooch is over the top. Two episodes in, and The Mooch is the main mover and shaker. He showed up dressed like a scummy rich villain that wanted to bulldoze an orphanage for no reason. 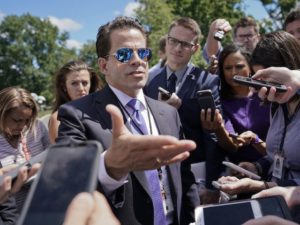 He started mocking the established baddies. He called Reince Priebus, “a fucking paranoid schizophrenic,” and abruptly kicked him off the show.  He distanced himself from Steve Bannon by saying, “I’m not trying to suck my own cock.” That alone would be too much for a villain we’ve just been introduced to, but he went further and claimed, “I’m going to fire every one of them…so the entire place will be fired over the next two weeks,” before reaching his climax, “What I want to do is I want to fucking kill all the leakers!”  Someone that wrote for Skeletor would think this was going too far. We were then supposed to assume that he big-dogged his own boss by starting a war against the press, blaming all his problems because, “I made a mistake in trusting a reporter.  It won’t happen again.”

He has the crazy outfits, says the outrageous things.  He is the Poochie of Trump reality show.

Most importantly The Mooch’s presence brings nothing to the series. Trump needs an ally to maintain the series suspense and while the Mooch’s sick burns provide social media appeal, his two-dimensional villainness is his only character trait.  A trait, incidentally, which doesn’t make sense when we look at the few times he came up before; working as a fundraiser for Obama last season; backing Hillary Clinton; and wanting to restrict gun ownership, take the environment seriously, and protect gay marriage.

If we had seen The Mooch a few more times last season to establish why he was now a cartoon villain it might at least be consistent. His backstory as it stands now is simply, “Wall street asshole that tells it like it is!” It’s too late to start adding any kind of compelling villain on a show that already has so much going on.  Every Mooch scene feels like a lost opportunity to see someone like Nancy Pelosi who hasn’t done much this season except for act as a punching bag during the Ossoff storyline. The Mooch is just angry for the sake of being angry.

More irritating is the way that The Mooch’s comments are pushed to be so edgy by people that embarrassingly try bolster his bad-boy credentials.

Geraldo Rivera was first up to do so. 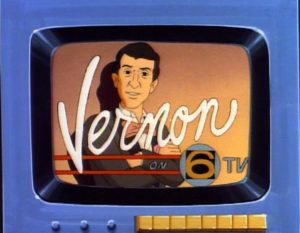 Geraldo explained that we were supposed to see him as some how setting up The Mooch’s inexplicable character beats because his character was also from Long Island. He then tried to tie the characters more closely together by saying that, “The West Wing is absolutely riddled with rats,” which tells us nothing new and does nothing to explain the inexplicable new villain.

Peter King, who was set up earlier as an effective antagonist, came next. 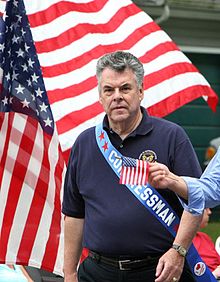 Peter King has been an effective second-tier bad guy.  Repugnant in almost all ways, his character could never fully come through because of the obvious problems with his support of the IRA and his screeching hysteria regarding all other people practicing asymmetrical warfare. But he was always meant to be a background character that added a little color. He also used Geraldo’s nonsensical excuse that we are supposed to regard him as prefacing The Mooch.

I’ve known a lot of guys like Anthony Scaramucci — probably not as smart as he is. But reading that, it sounded like a lot of guys I’ve spoken to late at night. After political meetings, a few guys get together and they start talking that way,

Even if we are to assume that being from the East Coast (or whatever) clears up The Mooch’s character problems, it does nothing to explain why The Mooch was needed this season. Why are we supposed to buy that The Mooch is an “in your face” addition to a team already packed with them?  And why go so far as to force The Mooch to be something of a leader of this team?

Talk to me when we’ve witnessed a season of him building up to this character.

(With apologies to Ben Lindbergh of The Ringer)

← Reflections in Plaid
Late Capitalism in Weimerica Pt. 4—To Arms →