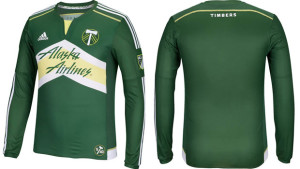 Is Soccer boring? Yes. But I am happy that the Timbers won the MLS Cup. More on that in a sec. I’m not done bashing the sport.
If you know how to run, you’ve learned the basic mechanics of the sport. You kick a ball. Sorry, but a sport with such limited skill-sets just doesn’t interest me to a competitive fervor as the NFL, the NBA, baseball, or even hockey.

I was listening to jock talk radio and I heard someone try to defend the Soccer because it’s a fast sport. Nascar is fast and it sucks. Another strike on the MLS is that it televised it’s Championship game midday on Sunday. Hmmm, what else might compete with that time slot? Oh, I dunno, a little thing called the NFL. The MLS playoff format is whack. It plays a one game first round series. I’m okay with that, MLB does that. Then go to a 2 game format where the aggregate score determines the winner. I like that format, it’s interesting. It goes that way for the next couple rounds. And for all the marbles, get this, it’s a one game, winner take all! For the championship!? Why on Earth would you have a two game series in the round before, then trim it to ONE for all the marbles? Hell-ooo? Do you NOT want to make money? Obviously you don’t want money because it wasn’t the Timbers who won the MLS Cup, it was the Alaska Airlines.

I have deeper interests with the Timbers winning. I want a second major league sport in Portland. See what I did there? I kill me. I’m talking NFL, MLB and even NHL. I don’t see baseball or football in the City of Roses anytime soon, but hockey already has an arena. Hell two, with a renovation of the Memorial Coliseum.

I liked seeing the Portland Timbers in the playoffs. If the city of Portland is represented, well, “Portland” is no where to be found on the Timbers jersey.  If the Timbers are represented, well “Timbers” is only in tiny letters on the back of the jersey that no one could see on the pitch or even watching at home.  The point is: if a Portland team is going to compete, I am happy when they win no matter what they’re adorned in. I have a hometown pride thing no matter the sport.

In the world of sports, fan bases cross-pollinate and are a factor when talk of moving a team or expansion comes up. The Timbers Army could just help bring another franchise to PDX. Sports is all about the “what have you done for me lately?” mentality. What has the Portland sporting world done lately? The Timbers are champs. Good on you. But enough about that. When do we get Hockey?